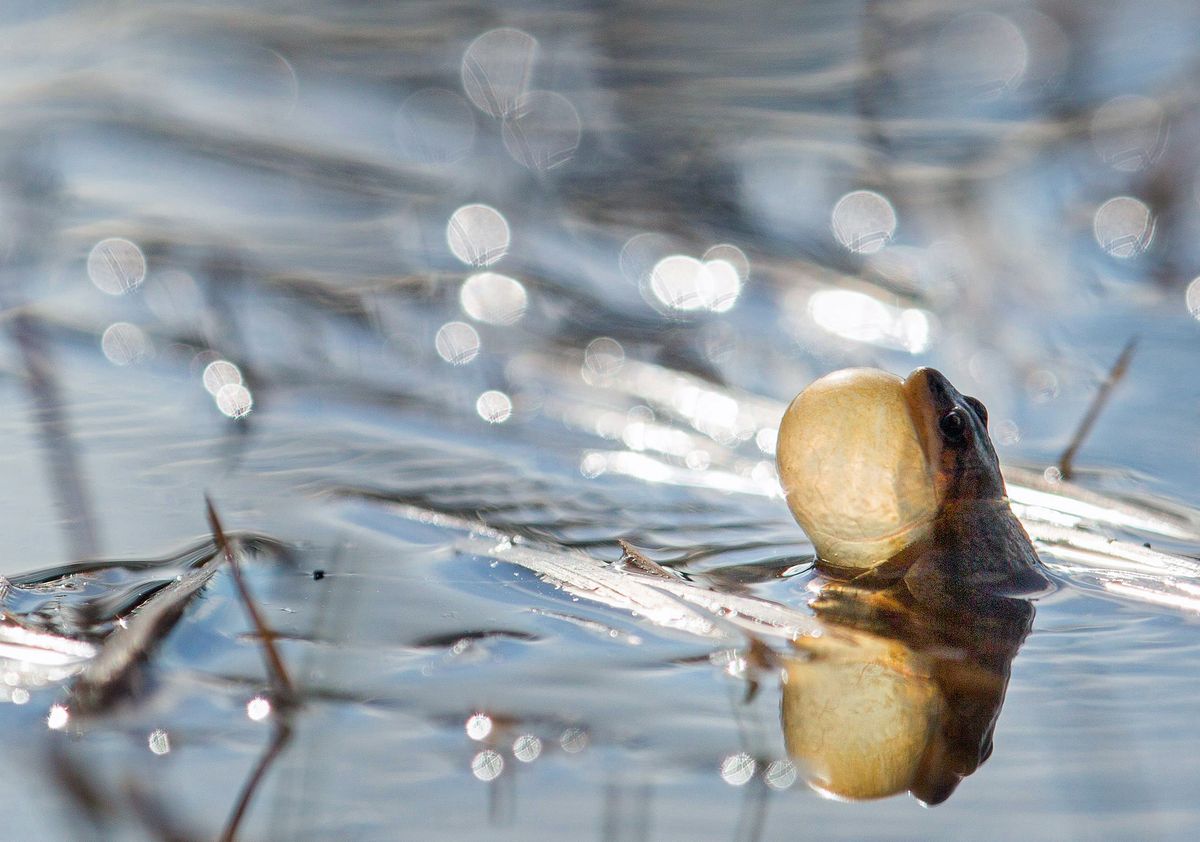 BILLINGS – Mention Yellowstone National Park and amphibians aren’t likely to leap to mind. Yet the frogs, toads and salamanders that live in the 3,500 square miles of protected landscape are indicators of the park’s health, as well as environmental changes.

There are four species of amphibians native to Yellowstone: the boreal chorus frog, Columbia spotted frog, Western tiger salamander and Western toad. Of these four, chorus frogs and spotted frogs inhabit more niches in the park.

Understanding these small species’ habitat requirements and life cycles can help scientists comprehend the complications of climate change in a temperate, relatively protected ecosystem like Yellowstone. Such knowledge can also point to the interrelationship of amphibians to other species, like pond-building beavers.

“Variation is a constant in nature,” said Andrew Ray, an aquatic ecologist for the National Park Service’s Greater Yellowstone Network in Bozeman, during a December presentation through the Osher Lifelong Learning Institute at Montana State University. “Monitoring helps us understand that natural range of variation.”

This scientific information, gathered over decades, can guide the National Park Service’s management actions, such as where to locate a new road or building, Ray noted.

The importance of long-term monitoring is illustrated by a population of frogs that once lived near Fishing Bridge, where the Yellowstone River leaves Yellowstone Lake. In 1988, news of amphibian declines caught the attention of Charles Peterson, a professor of zoology at Idaho State University.

“It was especially troubling because it was occurring in wilderness areas and parks, which started a lot of speculation about the causes,” he said.

Pollution, ultraviolet radiation caused by a thinning ozone layer in the atmosphere, habitat fragmentation and disease were considered possible causes for fewer amphibians.

“I was a snake ecologist, but concerned enough about this to start a modest monitoring program in the 1990s,” Peterson said.

In 1993 Peterson and his colleague, Debra Patla, visited Lodge Creek in Yellowstone National Park. The location was chosen because of work done there in the 1950s by Fred Turner.

Turner was stationed for three summers at Yellowstone Lake while working as a ranger naturalist. During that time, the herpetology student from the University of California at Berkeley gathered detailed information on a population of Columbia spotted frogs that lived along Lodge Creek and its associated wetland.

Peterson and Patla found a much different environment at the creek. A road now cut across Turner’s study area. Along one edge of the meadow new buildings had been constructed. The wetland at Lodge Creek’s headwaters had nearly vanished as lodgepole pine trees encroached.

At the same location now, the frogs are locally extinct.

“This is a very important point: When I first went there in 1991, this looked like a very good spotted frog population to us,” he said. “And it was just a ghost of what it had been previously. We wouldn’t have known that unless Turner had come and visited.”

Even with such technology, amphibians are challenging to study. They are small, have low survival rates and frequent population turnover.

“These systems are dynamic,” Ray said. “It complicates the work we do.”

Yet monitoring for decades is the only way to make sense of environmental changes, he added, and species like amphibians act as “biological sensors” to warn scientists because they are sensitive to environmental shifts.

“In this era of rapid environmental change, good ecological monitoring is increasingly important,” he said.

The end goal for scientists such as Ray is to translate the information gathered into the conservation of species and habitat. In places like Yellowstone, Grand Teton National Park and Bighorn Canyon National Recreation Area where Ray works, he also interprets the information he gathers in order to provide park administrators with the material they need to make management decisions.

Perhaps nowhere is such monitoring more important than Yellowstone’s shallow, fishless ponds – on which the park’s amphibians rely for breeding. They are the “most climate sensitive” habitats on Earth, reliant on snowfall and rain to exist, Ray said. Consequently, climate change in the form of less snow and warmer temperatures has the potential to dry up or reduce the size of many of these key breeding grounds.

Ray said by the year 2100, even under some of the best-case scenarios, Tower Junction on the park’s north side is predicted to have temperatures comparable to warmer and drier areas like present-day Billings, Casper and Boise.

“We’re looking at a period that is going to have less runoff and consequently drier wetlands across the landscape,” Ray said.

Consequently, Yellowstone’s future doesn’t look amphibian friendly. Only detailed scientific analysis like Peterson and Ray have conducted will document how these animals adapt, or don’t, when faced with such difficult obstacles.