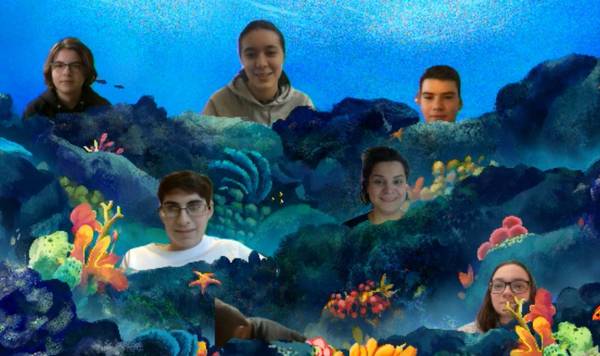 RANDOLPH, NJ- As COVID-19 continued to impact nearly every aspect of life at RHS, one tiny corner of the high school was doing its best to remain intact. Improv Club, a subsection of the RHS Drama Club, has carried on with weekly meetings, despite the challenges of practicing live improv in an online setting. Although they are currently unable to hold a live performance, the club has worked to strengthen their improv skills in the hopes of showing off their skills later in the school year.

RHS sanctioned an Improv Club over seven years ago. In the past, the club held weekly, in-person lunch meetings where students worked on activities and games that helped them strengthen their ability to think on the fly. Students came to participate and learn new concepts, as well as to just have a safe space to eat lunch.

“Before COVID, the club would always have a pretty big turnout,” said Kiki Brennan, the improv chair of Drama Club. “It still has a decent amount of people considering the fact that it’s a virtual club, but there aren’t as many as there used to be.”

Our newsletter delivers the local news that you can trust.

You have successfully signed up for the TAPinto Randolph Newsletter.

Since the pandemic, Brennan has led weekly virtual meetings after school, running games that help strengthen the student performers’ comedy and improv skills. The time of day for meetings was not the only change, however. Because many of the typical activities from prior years didn’t work in the virtual environment, Brennan had the difficult task of curating only the games that didn’t require an in-person physical component.

“Good acting relies on good listening and communication,” noted Cara Canfield, who advises both the Drama and Improv Clubs and teaches English at the high school. “Meeting virtually makes that difficult. Nevertheless, we’re getting used to communicating in video calls.”

Some of the most popular games that have worked well online this year included “Freeze”, where students “freeze” an ongoing scene and insert themselves in it, tapping someone out and completely changing the story. Another popular game is “A-Z”, where two students try to carry on a conversation with the first letter of each sentence beginning with the next letter of the alphabet. Many of these games had always worked virtually, but Brennan modified others so they could work in a virtual environment as well.

Despite the challenges, both Brennan and Canfield agreed that the virtual format had succeeded in becoming a successful space for members of the Drama Club, with the performers always getting into character, and the spectators students seeming as equally engaged in the stories being presented virtually as they had been when watching in a live environment.

“Part of what I love about advising Drama Club and Improv is that I see kids who start off coming just to watch,” Canfield said. “But before long, they see how fun it is and how supportive the other kids are, and they jump right in!”

Now an RHS senior, Brennan has been doing improv since the sixth grade. Although she admitted that her final year of high school looked completely different from prior years, she was grateful for the feelings of comfort and normalcy the Improv Club brought her.

“I think we’ve got a really great group this year,” she said, “and I’m looking forward to the great things this club will do in the future!”

Editor’s Note : Emma Wesolowski is a student at RHS participating in a journalism program with TAPinto Randolph.