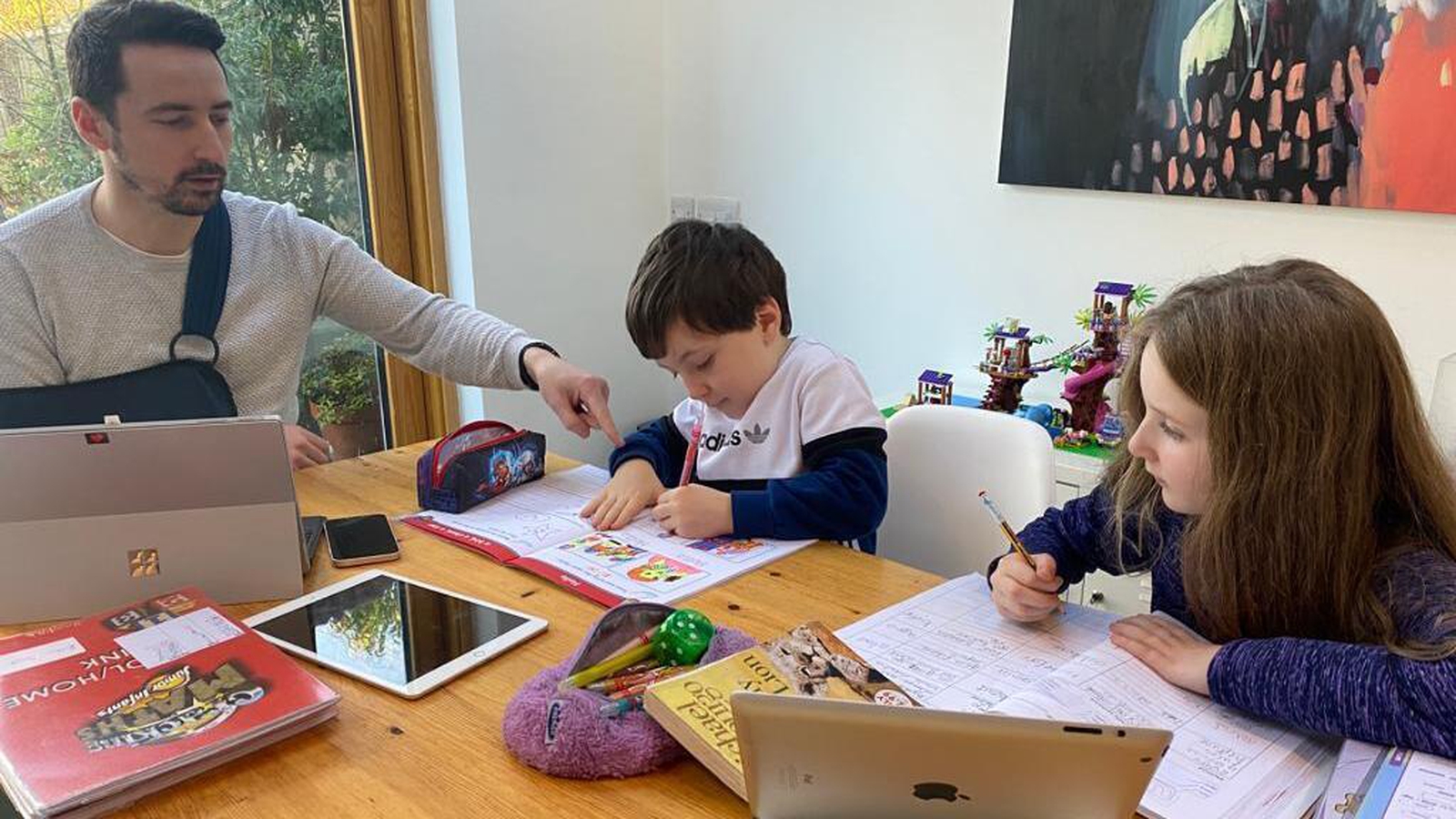 The Government has reiterated its commitment to reopen schools on 1 February, but with just over ten days to go until that deadline, many are skeptical about the prospect of pupils returning to the classroom.

In homes around the country, kitchens have been converted to classrooms and dining tables to desks, as a second semester of homeschooling is in full swing.

Catherine Hanly, a mother-of-three from Co Roscommon, is home schooling with a 14-month-old baby, a junior infant and a senior infant, while also caring for her husband who is recovering from a serious illness.

She said her full-time job involves a lot of teleconferencing and back and forth through emails, and that her employers have been flexible in facilitating home schooling.

“The second guy, had to do a piece to send into the class, what’s one good thing and what’s one not good thing about home schooling, which was very interesting to hear it from his perspective and his world is heavily impacted by his baby sister.

“So when she’s up and she’s about and she’s busy, he can’t do his school work.”

Anluan Dunne from Tralee in Co Kerry, who works in tech, is homeschooling his five-year-old son and nine-year-old daughter while his wife – a secondary teacher – is delivering live classes from their living room. He says the family is struggling with juggling several jobs.

“My daughter’s in third class and she’s probably got a more substantial workload and is more capable of doing it herself.

“My son is in Junior Infants so that’s 100% full on. We have to work through all the assignments him, there’s videos you watch with him on iPad and laptop where his teacher outlines what way you should approach the teaching.

“It’s all new to me. I’m doing the majority of teaching as my wife is teaching live so it’s been an experience, certainly one that’s becoming more challenging as the work mounts up.

“The house is in a heap. Two parents are doing the work of five people, both our full time jobs, two primary teachers and a childminder.”

For Donal McGrath, who lives near Bantry in Cork, patchy rural broadband is causing a headache in an already hectic household which has a first class, a sixth class and a third level student working online while he himself delivers classes to his secondary school students.

“There are three adults in the house,” he said. “There are two parents who are both working remotely and they have their older brother who is completing his masters online so there are plenty of people to pitch in and help out, but it can get somewhat fraught.”

Deirdre Feehily is a community nurse in Lucan in Dublin who has a daughter in fifth class and another at second level.

She does not have much time to help on the homeschool front, and while her older daughter is occupied from 9am to 4pm with live teaching, she said she wishes her primary daughter was getting more live classes at what she believes is a critical time in primary school.

“Learning definitely has not been as good,” she said. “Maths has slipped, Irish has slipped. She’s filling in the books on Seesaw. She’s sent the work and she is doing it. She zooms with a friend of hers and they do the work together but there’s no teaching. She may be learning but it’s mainly filling in books.

Some students are trying to see the bright side – like sisters Dasha and Daisy Evans from Newtownmountkennedy in Co Wicklow.

Dasha, who is in third class, said: “I’d rather be at school but it’s pretty easy because my Mum will give in to do a tiny bit less work then we are meant to. I get to do my stuff at my own pace.

Fifth class student Daisy said: “I don’t really like it, but I actually do like it in a way because you don’t have to get up as early as you do normally.”

Seven-year-old Casey Doyle from Raheny in Dublin is enjoying her daily zoom call with her first class teacher.

“There’s two groups and I’m in one of the groups,” she said.

“But last time I had a zoom with my teacher all the class was there. It’s good but it’s not as good as seeing them in person.”

Some teachers are double jobbing, homeschooling their own children while also teaching remotely. Among them is special education teacher Meadhbh Caseiro, who has a four-year-old, a five-year-old and seven-year-old with additional needs at home.

“My eldest boy is in first class and Liam has Downs Syndrome,” she said. “He’s in a mainstream school and he’s doing great, but he does require one-to-one attention for all of his school work.

“My 5-year-old Senan, he is in senior infants, so he needs one-on-one, and my daughter Fiadh is in preschool and she’s just a typical four-year-old who is demanding my attention too.

“My school is using Dojo so I’m trying to learn how to upload videos, how to make videos, making sure I’m sending them on the right setting. There’s sending out to the whole class, sending out to individual kids and the last thing I want to do is post it in the wrong place.”

But for those teaching in disadvantaged schools, there are even greater concerns. Julie Somerville teaches third class in a primary school in Tallaght in West Dublin.

“You’re not reaching as many children as you would like to,” she said. “There are so many children that we just cannot get in contact with and it’s not for lack of trying. We have a fantastic home school liaison and she’s out knocking on the doors every day. We’re calling nonstop.

“We would have had a lot of children as well who’d be living in homeless hubs and we would just have no access to them, so it hasn’t been easy. Maybe three children out of my class have emailed me work back, but that would be three out of twenty.

“It’s not what we’d want but I know everyone is trying their best, but it’s obviously very, very challenging in difficult circumstance. We want them back in the classroom.”