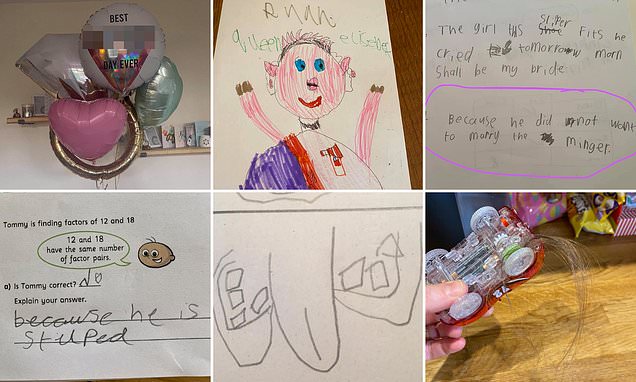 Nicola Gerard  shared her son’s very amusing contribution to his Maths lesson today – not sure he would’ve got full marks for that answer!

Donna Shingler shared her daughter’s drawing of her sticking her tongue out, as part of instructions for brushing her teeth

Kirsty Arthur shared a snap of her five-year-old’s efforts of drawing Queen Elizabeth. Little did she know he decided to depict her as a pig instead …

Cathryn Parrish message posted her son’s message to his class yesterday which read: ‘So do I also need to change into my PE uniform or am I allowed to stay in my pyjamas or what?’

Melissa Stallard posted this snap alongside a caption which read: ‘My kids let the budgie out whilst I was on a Zoom parents evening. He was circling the room in the background’