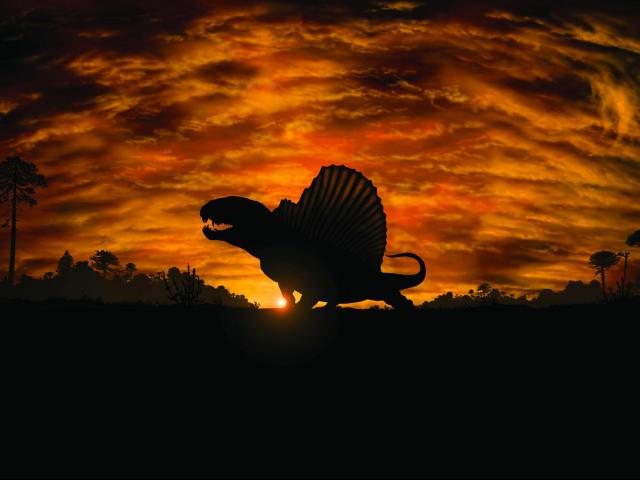 The new exhibit will take museum guests back in time to meet creatures that dominated millions of years before dinosaurs in a time known as the Permian Period.

Paleontologist Dr. Christian Kammerer loves to geek out on the grotesque.

“I’d be lying if I didn’t say I love how weird they are,” he said. “These are some bizarre animals. Life in the Permian is in many ways totally alien to anything we see today.”

Visitors to the exhibit will meet these monsters through artwork, mounted skeletons and full-size models.

Helicoprion, a shark-like predator, had a single row of teeth resembling a rotary saw.

“It would have spun outward from the center of the jaw,” Kammerer said.

They were early reptiles and pre-mammals that stomped and butted heads and bared their fangs between 299 and 250 million years ago. Fossils from the period have been found around the world, including quarries in North Carolina.

There’s titanophoneus and scutosaurus. There’s moschops and estemmenosuchus. And there’s dimetrodon, known for the flashy sail on its spine.

They lived on land and sea until more than 80% of all plant and animal life was wiped out 252 million years ago by huge volcanic eruption in what is considered the largest extinction Earth has ever experienced.

Volcanoes from the far north spewed carbon, methane and other greenhouse gases into the atmosphere, blanketing the Earth and holding in heat.

The reptile-like animals of the Permian Period were replaced by a group of reptiles called the archosaurs, which helped give rise to dinosaurs, according to the museum.

The exhibit costs $10 for adults, $8 for children and runs through Sept. 4.

Some of the recreations are by artist Julius Csotonyi, who also created artistic reconstructions for Dueling Dinosaurs, a first-of-its-kind exhibit coming to the museum in early 2023 that unveils world’s first complete T. rex.