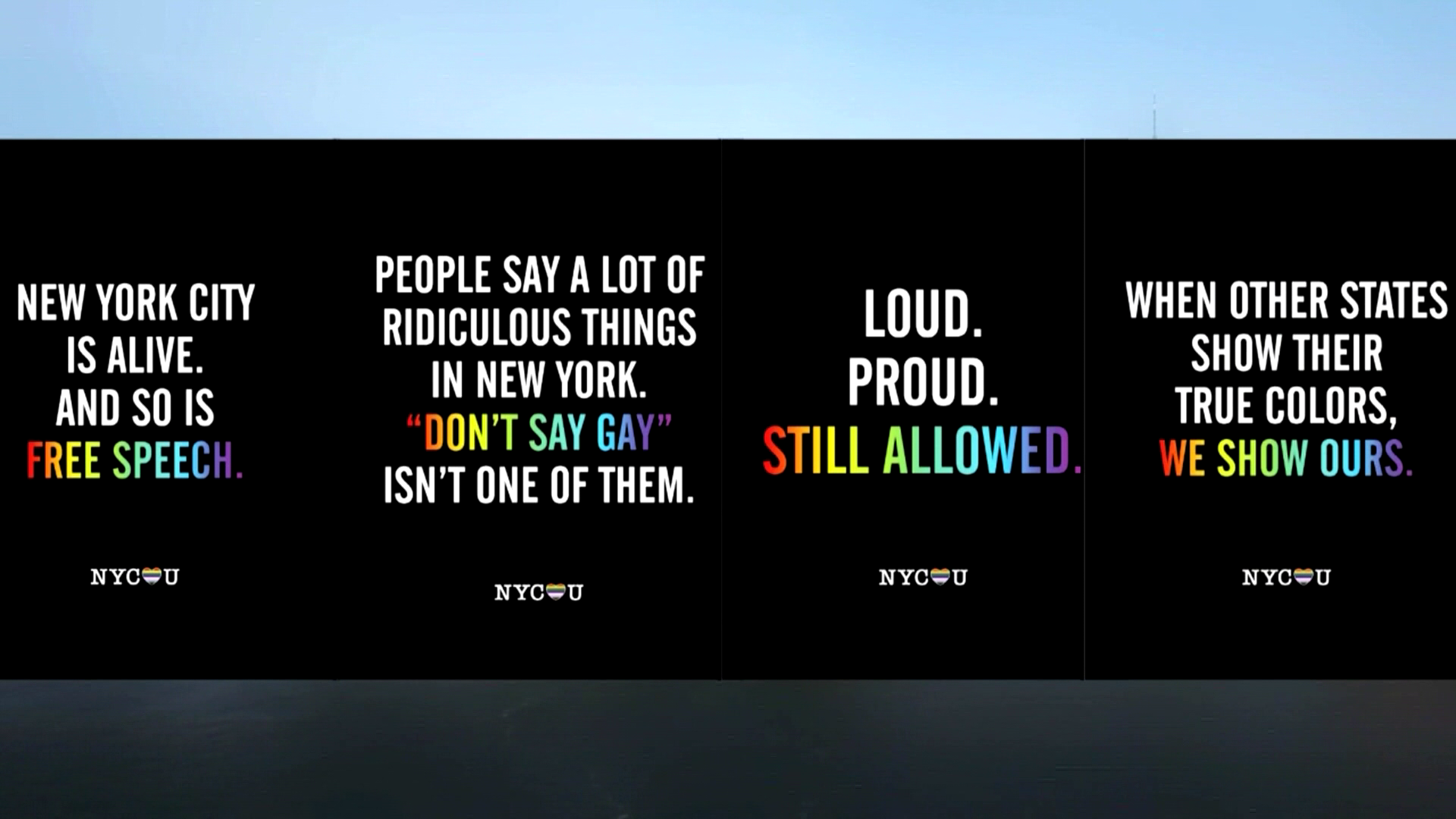 One state is making a bold statement about a controversial Florida law. New York is launching a campaign that says, “come to a city where you can say what you want.”

So how is Florida responding to the campaigns against it?

Governor Desantis loves to take shots at others, at Dr. Anthony Fauci, at President Biden, and now at Disney. But, this time, DeSantis is on the receiving end.

Eric Adams is the Mayor of New York City. “To those who are living in Florida, listen, we want you here in New York,” Adams said.

Mayor Adams put his money where his mouth is. He is paying for billboards in five major Florida cities encouraging Floridians to move to New York.

This comes after Gov. DeSantis signed the Parental Rights in Education bill into law, otherwise known as “Don’t Say Gay.”

Here’s a sample of what the billboards say – “Come to the city where you can say whatever you want.” “People say a lot of ridiculous things in New York. ‘Don’t Say Gay’ is one of them.”

Republican State Representative Spencer Roach says it’s all fun and games. “You know, I just, I just, I just think it’s fun. You know, and I do, I have to look at it. Mayor Adams in New York says, ‘Well played, Mayor,’” Rep. Roach said.

Roach clearly got a kick out of the billboards. He thinks they’re pretty clever but doesn’t believe they’ll have any real impact. “We’ll see if anyone actually ends up leaving the state of Florida and any large numbers as a result of this. I doubt it,” said Roach.

The billboards help the mayor’s base more than anything else. They’re also an attempt at payback. DeSantis encouraged police officers ins states with vaccine mandates like New York to move to Florida in October.

Thousands of New Yorkers have moved to Florida since the pandemic began, and I doubt many will leave Florida because they’re so upset about the lack of classroom instruction on gender theory and sexuality for children in grades K-3.

Mayor Adams is doing Florida a favor. If anyone is so upset about our governor defending parental rights that they want to leave Florida for a crime-ridden socialist dystopia, our state will be better off without them. In fact, the mayor should pay for their flights to NYC!

If Mayor Adams feels that political grandstanding is the best way to spend city funds, instead of addressing the real problems the city is struggling with, the taxpayers of New York may have their own thoughts to share with him.

As for your question about tourism, Florida has nothing to worry about: Last year saw the highest level of domestic tourism in the history of our state. In both Q3 and Q4 of 2021, tourism in Florida exceeded the same quarters of 2019 – pre-pandemic levels. So, Florida is one of the few places in the world where more people are visiting now than before the pandemic.

It’s worth noting that last year, for the first time ever, Florida received more international tourism than New York.

Many of the tourists in Florida have visited us from places with mandates and restrictions, to enjoy the freedoms and sense of normalcy that Florida has become renowned for, under Gov. DeSantis’ leadership. Business is thriving here as well because the governor has kept our state open, and our tax burden remains the lowest in the country.

These are things that everyone can appreciate, regardless of their gender or sexual orientation. Therefore, we are not concerned about boycotts or other economic harm to Florida as a result of any legislation.

But even if we were: No amount of money would convince Governor DeSantis to change his position. He will always stand for parental rights and protecting children.


Copyright 2022 Fort Myers Broadcasting Company. All rights reserved. This material may not be published, broadcast, rewritten or redistributed without prior written consent.