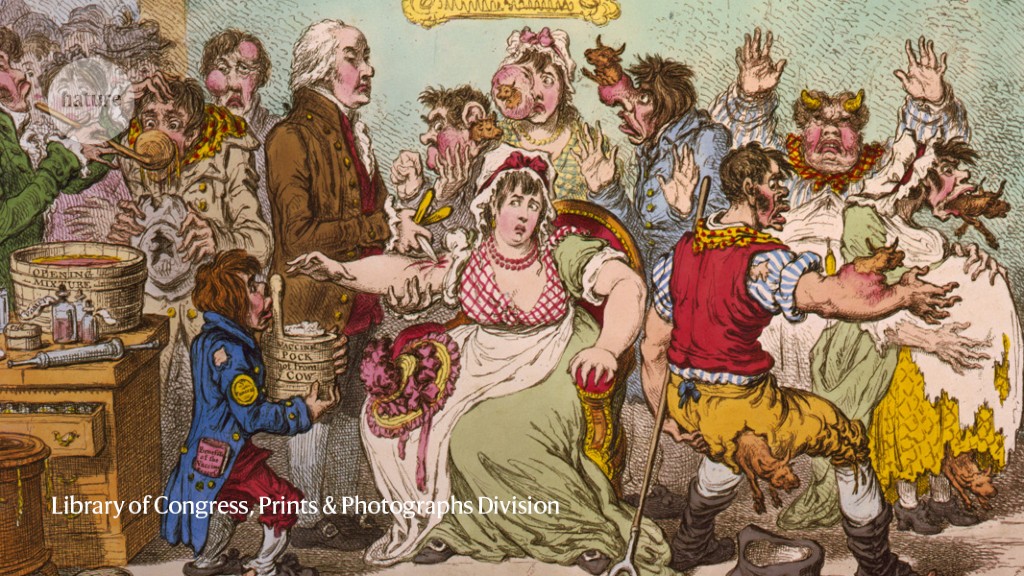 Patricia Fara, a historian of science at the University of Cambridge, UK, has written for decades about subjects from Isaac Newton to the women who worked as researchers during the First World War. Along the way, she’s collected illustrations. In a yet-to-be-published project, Fara has curated 42 scientific cartoons and caricatures from the eighteenth and nineteenth centuries, mainly from the United Kingdom and the United States.

During this period, artists such as William Hogarth and James Gillray skewered the social and political tensions around emerging scientific, medical and technological ideas, from electricity to vaccination. The memes of their day, these images reached much of literate society and influenced public opinion. Before the rise of mass publishing, they were sold as individual engravings, often hand-coloured and displayed in shop windows to be appreciated by passers-by and purchased by the wealthy to impress house guests.

Later, as cheap newspapers became available, black-and-white cartoons proliferated. Fara explains how they recorded the tensions — and the colonialism, racism and sexism — that swirled around the birth of modern Western science.

It has always struck me how incredibly informative and informed they are. They include precise details of topical scientific questions; to understand them properly, you need to have quite a lot of knowledge. They provide evidence of the level of debate in the public arena. Nowadays, a YouTube video might be an equivalent to see how much people are learning about scientific issues and how much they care about them.

How sophisticated are these visual satires?

Caricatures have multiple layers: jokes that used to seem obvious now have to be deciphered. Take Gillray’s 1795 caricature of Joseph Banks, president of the UK Royal Society, as a butterfly wrapped in red with a medal on his chest. Enlightenment viewers would immediately recognize that the image was mocking Banks’s elevation to the prestigious Order of the Bath by King George III. They would also pick up the subtexts: that Banks was notorious for sexual exploits on a voyage to Tahiti, that he was cooperating with the government to expand Britain’s imperial possessions overseas and that he was mocked as a collector who knew nothing about physics and mathematics. But among the shells on his wings is the red cap of the French revolutionaries. Science wasn’t — and isn’t — an abstract subject out there on its own. It’s saturated in political, commercial and personal interests.

Another of my favourites is an 1872 cartoon of Charles Darwin as a monkey squatting suggestively close to a woman whose billowing skirts resemble a sea squirt. Victorians found this one funny without needing any explanation. In his latest book, Darwin had dared to compare human with animal emotions — and he also relied on his argument that women’s evolutionary history made them more proficient in the kitchen than in the study. That the caption includes the technical name for sea squirt, ‘ascidian’, testifies to the enormous contemporary enthusiasm for exploring marine life and rocks along the coast.

Why was Darwin such a popular subject?

Darwin was striking: he had that long, Moses-like beard, beetling brow and domed, wrinkled forehead that make him an ideal cartoon character. He was usually portrayed as looking kindly, a sort of friendly monkey with a long curly tail. But similar simian imagery was used to denigrate Irish people during times of political unrest in the second half of the nineteenth century. There were so many debates about ethnicity and class and mental ability, and Darwin’s ideas of evolution got sucked into those in ways that are horribly objectionable. The tenor of the debates changed considerably when he explicitly put humans in the evolutionary chain alongside animals.

How did caricatures reflect the racism of the time, as in the appalling ‘Monkeyana’ cartoon that appeared in the magazine Punch in 1861?

I’m shocked by that picture. Its popularity indicates how differently people thought then. There is so much being referenced, which any Victorian would have understood straight away. Most obviously, explorers had been sending back reports of discovering gorillas in the middle of the forest in Africa and how frightening they were. That the gorilla is wearing a placard reading “Am I a man and a brother?” relates to a political slogan used by anti-slavery campaigner Josiah Wedgwood.

Contemporaries would have made other associations, equally grim to reflect on now. Some Victorians saw enslaved Black African people as animals — which they argued justified cruelty and ownership. They believed in a hierarchy going from white Europeans down to Asians and Africans. That raised a debate over where to put women: should a European woman be above or below an Asian man? It’s horrifying to recognize that that’s how people thought, but we have to face up to that, not pretend it didn’t happen.

Regarding sexism — how should we understand the caricature of astronomer Caroline Herschel, from 1790?

In that picture, she represents a curiosity, a woman who’s discovering a comet. She’s not being valued because of the contributions she made; she’s being portrayed as a freak. She’s got exaggerated features, a great mark on one cheek from the smallpox she had when a child. The speech bubble is in fractured English because she was German and had an accent. She’s being mocked, but why? Might it be because men were afraid that women might turn out to be clever?

Vaccination was a common topic. Why?

The famous caricature by Gillray from 1802 is a comment on Edward Jenner’s introduction of a smallpox vaccine that was based on cowpox. It shows the recipients turning into cows. At the time, a real concern was what would happen as a result of putting foreign material, animal material, inside a human body. And unlike now, there was good reason to be suspicious, because the vaccine hadn’t been properly tested and the equipment was so dirty that people often became sick.

In the late nineteenth century, long after the British government had made smallpox vaccination compulsory for babies, there were still fears about it not being 100% effective and about disease being transmitted through the procedure. The underlying debate was about the conflict between individual liberty and the right of a government to protect the nation.

Are these equivalent to coronavirus cartoons?

No, I think they’re very different. Most people today aren’t really aware of the intricacies of scientific debates. Science is on a pedestal, it’s the basis of the whole of society: there’s no point laughing at it. In modern cartoons, it’s not scientists and doctors who are mocked — it’s politicians, leaders such as Donald Trump and Boris Johnson, who don’t listen closely enough to experts like Anthony Fauci, head of the US National Institute of Allergy and Infectious Diseases. I did see a wonderful German cartoon about Brexit and the variant discovered in the United Kingdom last year. It showed a big, fat virus painted with a Union Jack and laughing smugly because the United Kingdom had a different disease from the rest of Europe. As the caricaturists of the eighteenth and nineteenth centuries knew, pictures are an extremely effective way of conveying a message.

The interview has been edited for length and clarity.