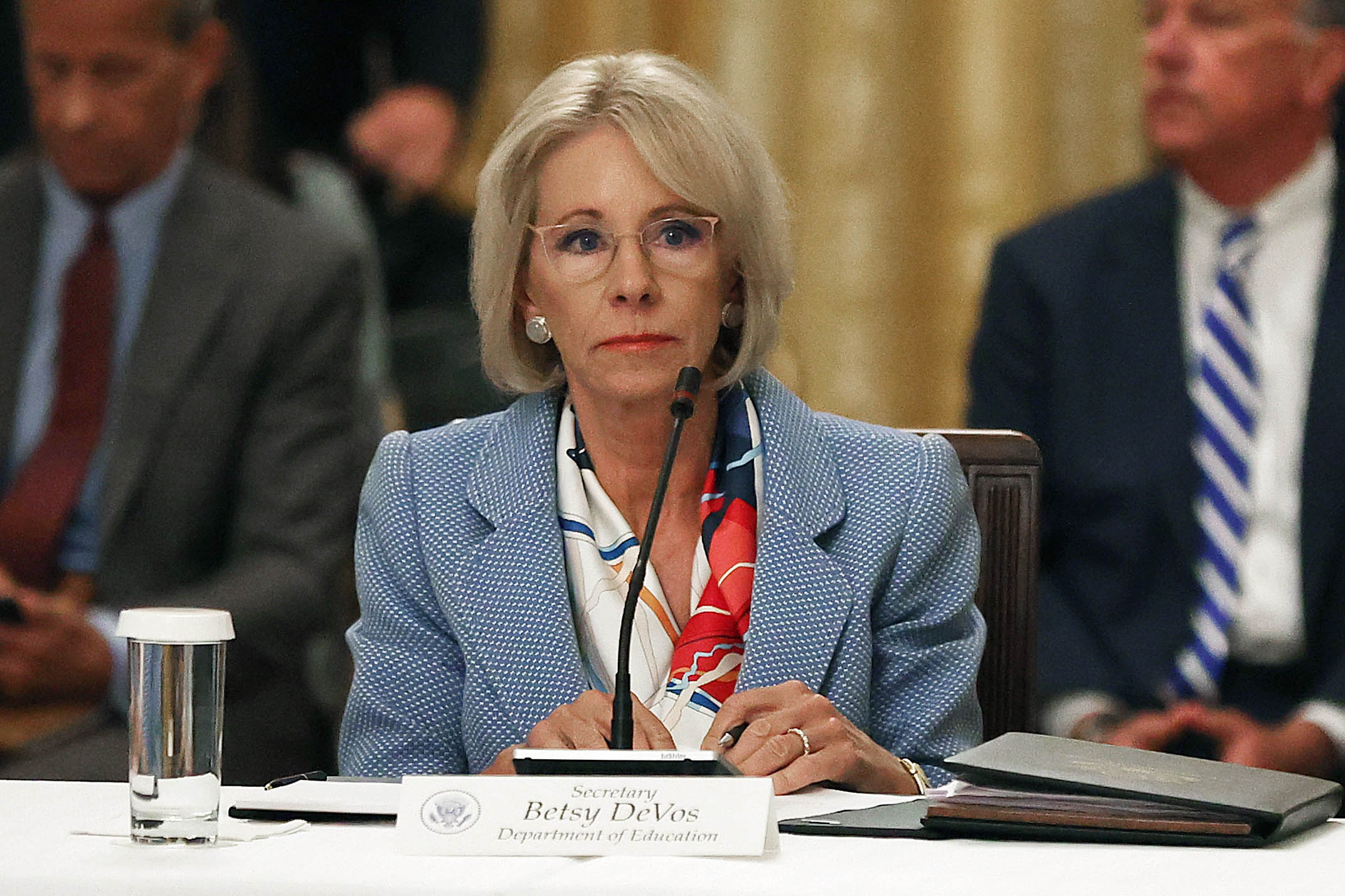 “We should be highlighting and celebrating your Administration’s many accomplishments on behalf of the American people,” DeVos wrote to Trump. “Instead, we are left to clean up the mess caused by violent protestors overrunning the U.S. Capitol in an attempt to undermine the people’s business.”

DeVos told Trump that “impressionable children are watching all of this, and they are learning from us.”

“I believe we each have a moral obligation to exercise good judgement and model the behavior we hope they would emulate,” she wrote.

Each resigned in protest after pro-Trump mobs stormed and ransacked the U.S. Capitol, staging a riot that left five people dead.

A White House spokesperson did not immediately respond to a request for comment on DeVos’ resignation, which was first reported by the Wall Street Journal.

Earlier Thursday, DeVos’ former chief of staff appealed to her and Vice President Mike Pence on Twitter to help remove President Donald Trump from office by invoking the 25th Amendment.

Josh Venable, who in September joined a group opposing the president, wrote “it’s time for the 25th” in his tweet, adding “@realDonaldTrump is unable to discharge the duties of his office. Please, for the sake of the Republic, step up, lead, do what you know is right. #25AmendmentNow”.

The message came as top Democrats were making the same appeals while also weighing a second impeachment of Trump as an alternative.

The vice president and a majority of either the Cabinet or another body established by law, including Congress, can initiate a president’s removal under the 25th Amendment.

DeVos’ most prominent critics on Thursday cheered her departure. American Federation of Teachers President Randi Weingarten tweeted that she wished DeVos would have remained in office to invoke the 25th Amendment, “but still I support her action to resign in protest of Trump’s actions.”

She followed her tweet with a two-word statement: “Good Riddance.”

Frederick Hess, who directs education policy at the conservative American Enterprise Institute, praised DeVos’ decision. “Her resignation was an appropriate response to President Trump’s seditious behavior,” he said on Twitter. “I admire Secretary DeVos for refusing to serve any longer under an irresponsible, dangerous executive.”

DeVos’ tenure was marked by deregulation, school choice advocacy and relentless criticism of traditional public schools. She frequently sparred with Democrats, civil rights activists and teachers unions, and included an attack in her letter to Trump on “union bosses,” who she said are helping deny access to education during the pandemic.

Tracking the people, policies, and emerging power centers of the Biden Administration.

She urged career staff last month to “be the resistance” and called on Senate Majority Leader Mitch McConnell in a letter Monday to reject much of Biden’s education agenda in the coming years.

In her letter to Trump, DeVos wrote that leading the department gave her an opportunity to advocate for “the forgotten students the traditional system leaves behind.”

“We have achieved much,” she wrote, pointing to the national conversation she said they sparked about “putting students and parents in charge of education, leading to expanded school choice and education freedom in many states.”

She highlighted their efforts to return power to states and communities, increase access to Pell Grants, defend First Amendment rights and return due process to schools — a reference to her Title IX sexual misconduct rule, which has been criticized for its protections for the accused.

DeVos, who joined Trump in issuing hollow to yank federal funding from schools that did not physically reopen during the pandemic, also said “history will show we were correct in our repeated urging of and support for schools reopening this year.”