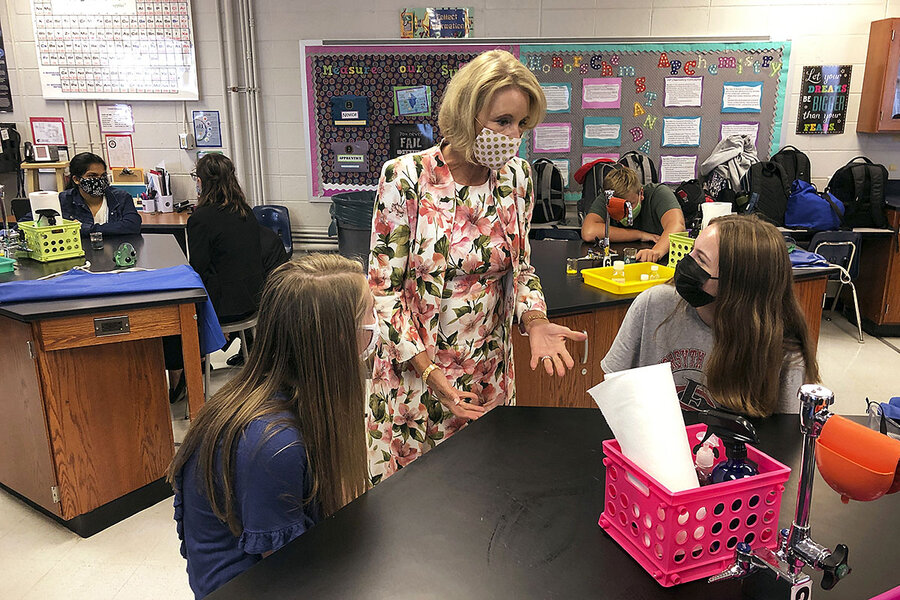 Education Secretary Betsy DeVos is one of the highest profile Cabinet members to resign from President Donald Trump’s administration, writing in the wake of the rampage at the Capitol, “Impressionable children are watching all of this, and they are learning from us.”

“There is no mistaking the impact your rhetoric had on the situation, and it is the inflection point for me,” she wrote to the president on Jan. 7.

Her departure on Friday was a dramatic finale for one of the longest-serving, and most controversial, members of President Trump’s senior administrative team – ending one of the most highly charged tenures in the history of the Education Department.

For four years, scholars say, Ms. DeVos used the bully pulpit of the department to fundamentally shift the American conversation around schools. In her dogged pursuit of what many saw as a radical, free market approach, she unraveled a decadeslong truce between Republicans and Democrats when it came to education policy. She advocated for school choice, including vouchers for private and parochial schools, and regularly attempted to cut the funding of her own department, saying publicly that she would be happy to work herself out of a job. On her way out the door she made available $2.75 billion in funds earmarked for non-public schools in the relief act signed into law in December.

While many supporters praised her resignation as courageous, and offered glowing reviews of her tenure as secretary, critics called the move “hypocritical.” Her rhetoric, they claimed, had helped fuel the anger and anti-government sentiments that many of the Trump supporters expressed Wednesday. Many on the left also saw Ms. DeVos as undermining what had long been a bipartisan commitment to public schools and also systematically dismantling civil rights protections for students.

All of this could have significant implications for the American school system and its roughly 50 million students – and for the person who soon steps into the role Ms. DeVos has vacated. Pundits had already been comparing her to President-elect Joe Biden’s nominee for the role, Connecticut Education Commissioner Miguel Cardona, and wondering how and whether he will face what one editorial called “the herculean task of clearing away the wreckage left by his predecessor.”

“Looking at what she has said over the past four years, and what she got away with saying – she’s a bellwether,” says Jack Schneider, assistant professor of education at the University of Massachusetts, Lowell, and co-author of the 2020 book “A Wolf at the Schoolhouse Door: The Dismantling of Public Education and the Future of School.” “Times have really changed,” he says.

A messenger, a lightning rod

Throughout her tenure, Ms. DeVos kept to the central message that “public education” did not need to mean “public schools.”

A billionaire philanthropist, and former chair of Michigan’s Republican Party, she had long advocated for charter schools and vouchers – a fact that, along with her lack of experience working in schools, prompted a storm of opposition to her nomination. (Vice President Mike Pence had to cast a tie-breaking vote at her confirmation hearing.)

Although some of the policies she supported were not particularly radical – charter schools, for instance, have enjoyed bipartisan support for years – Ms. DeVos’ open disdain for what she saw as a one-size-fits-all, wasteful school system made it easy for opponents to paint her as “anti-public school.”

Christian Carter leads a group of fellow Pittsburgh high school students during a protest on the confirmation of Betsy DeVos as secretary of education on Feb. 8, 2017. Ms. DeVos won confirmation by a slim margin, pushed to approval only by the historic tie-breaking vote of Vice President Mike Pence.

And she did little to counter that narrative, says John Bailey, co-founder of the educational strategy firm Whiteboard Associates.

Ms. DeVos was unapologetic even in the criticism of her own department.

“The 40 years since this department has existed, there’s been over a trillion dollars spent to close the achievement gaps,” she told Reason magazine in an August 2020 interview. “They haven’t closed one little bit. They’ve only opened in multiple areas. So why would we continue to advocate for doing more of the same thing and expect something different?”

Part of a larger change

Although the vast majority of K-12 school governance, and funding, lies in state and local school districts’ hands, scholars saw her work as fundamentally changing the American conversation around schools.

For years, Democrats and Republicans have basically had a treaty when it comes to public schools, says Professor Schneider. Democrats softened their unilateral support for teachers unions, while Republicans backed off from their support of vouchers and their push to allow religion in public schools. Meanwhile, the two sides came together to agree on different types of performance management and accountability standards through testing, and some level of market-based competition through charter schools.

But Ms. DeVos broke this contract, he says. She was not particularly interested in testing, and for her, public charter schools were only one small part of a market-based landscape. In this way, he argues, she was the tip of the iceberg of something larger taking place in education across the country.

President Donald Trump listens as then-Secretary of Education Betsy DeVos speaks during a discussion on the Federal Commission on School Safety report at the White House in Washington, Dec. 18, 2018. Ms. DeVos, who resigned Jan. 7 because of the violence at the Capitol and the role she saw Mr. Trump’s rhetoric playing in it, was one of the longest-serving of the president’s Cabinet members.

Right-leaning think tanks, philanthropists, and advocacy groups, including those connected to Ms. DeVos and her family, he says, have long pushed a free market ideal around schools – one that took funding away from a public school system and instead let parents make their own decisions about how to spend education dollars. This movement has supported some public debate, but more so bolstered a steady, below-the-radar effort to change state legislation, influence policy, and expand public acceptance of for-profit education ventures. Professor Schneider compares it to the decadeslong, quiet, and highly-strategic effort by the right to shift the judiciary.

With Ms. DeVos, he says, these efforts have become public and mainstream.

“She spent four years using the megaphone of the secretary of education [position] to talk about a future that previously seemed so out of bounds to both parties, at least at the federal level,” he says. “Now it seems to be the de facto position of the Republican party. I think she has totally succeeded in her aims. She has changed the terms of the debate.”

Those who support DeVos’ efforts say there is no grand conspiracy here, that she simply believes in enabling parents to do what’s best for their children. Pouring billions of dollars into a one-size-fits-all system simply doesn’t work, they say – particularly not for disadvantaged students. And the resistance to Ms. DeVos, they say, is more about adult priorities and jobs than it is about the well-being of children.

“I remember talking with a group of young African American students in a school where they were benefiting from the Milwaukee voucher program and looking outside at a sea of middle-aged, white protestors who apparently thought those students didn’t deserve that opportunity,” Ms. DeVos said in an interview with Rick Hess of AEI published by Education Week in December. “I think that’s a pretty good microcosm of what my experience in office was like.”

The situation in Milwaukee is more nuanced than that, of course. Many Black residents protested that day; Black teachers in Milwaukee have strongly criticized the local school voucher program, pointing out it has done little to narrow the gap between Black and white student achievement.

Betsy DeVos speaks at the Phoenix International Academy charter school in Arizona, Oct. 15, 2020. During her time in office, Ms. DeVos championed educational innovation and giving families the ability to decide where and how to educate their children.

But more fundamentally, critics see this sort of rhetoric as an attack on public schools, and therefore democracy itself.

Mr. Cardona seemed more than cognizant of this sentiment when he accepted President-elect Biden’s nomination. “For too many students, public education in America has been a flor pálida: a wilted rose, neglected, in need of care,” he said. “We must be the master gardeners who cultivate it, who work every day to preserve its beauty and its purpose.”

One long-standing impact of Ms. DeVos’ tenure, some educators say, is a hardening of lines around education policy. And that, many worry, will be the real legacy and challenge for the next secretary of education.

“I don’t think she is this devil enemy of public education that she’s been painted to be,” says Michael Horn, senior strategist at Guild Education and the co-founder of the Clayton Christensen Institute for Disruptive Innovation. “But there is a real backlash. And I think that is a real worry and a real risk. Education was a very bipartisan issue some 20 years ago.” Cracks in that bipartisan truce between parties started to show during the Obama years, Mr. Horn says. And then, he says, it “slid off the cliff over the past four years.”

Charter schools, which were pushed by Democrats a decade ago, have become a toxic issue for many in the party. So has the issue of whether and how schools should reopen during the coronavirus pandemic.

Ms. DeVos also left her mark on higher education, an area where the secretary has significantly more power, especially with regard to student loans. Through the week she left office, she urged Congress against forgiving student loan debts; during her tenure she made it more difficult for individuals to get their loans discharged. Ms. DeVos also created controversy through her rule-making authority over both K-12 and higher ed, which she used to shift Obama-era policies on sexual assault and civil rights cases. Many of those changes are expected to be reversed under the Biden administration.

In some ways, the pandemic delivered what Ms. DeVos could not. With schools across the country closed, parents made different choices, turning to microschools, pods, and other educational innovations. But even with this unprecedented change in school-going behavior, many doubled down on their support – or criticism – of public schools. To some, Ms. DeVos’ insistence that schools reopen – without, critics say, sufficient federal support or guidance – seemed to be just another attack; to others, teachers union opposition to opening schools seemed further evidence that public education was more focused on the desires of adults than on children.

It doesn’t need to stay like this, though, says Mr. Bailey. While the next education secretary will have to face the long-term impact from the pandemic, and from years of fighting, the position itself does not have to remain controversial.

“I don’t think it has become a polarized position,” he says. “It requires the person who is secretary to understand we are in a polarized environment.”