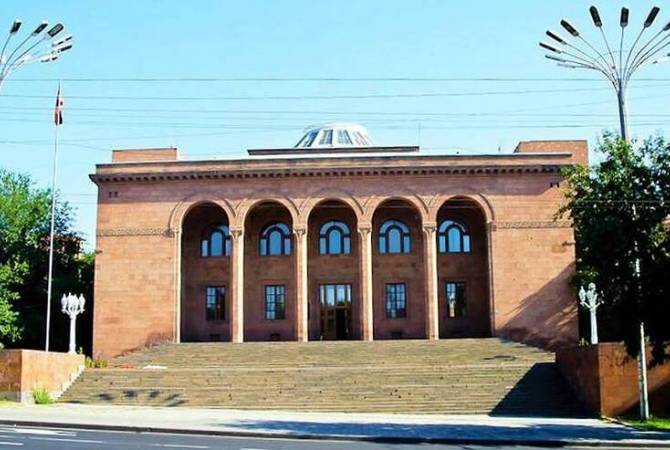 YEREVAN, FEBRUARY 3, ARMENPRESS. The National Academy of Sciences of Armenia has issued a statement, appealing to Russian President Vladimir Putin, US President Joe Biden and President of France Emmanuel Macron – the leaders of the OSCE Minsk Group Co-Chairing countries, to support UNESCO for the implementation of monitoring in order to assess the state of the cultural heritage in the territories of Artsakh that have come under the control of Azerbaijan.

“The strategy of the top leadership of Azerbaijan during the months following the ceasefire agreement, which ended the war against Artsakh and was signed on the 9th November by the leaders of Armenia, Azerbaijan and Russia, along with falsification and militant rhetoric shared on social media and international platforms, leave no doubt that the present government of Azerbaijan will do its utmost to annihilate the efforts for establishing peace in the region and for de-Armenization of Artsakh.

Due to hate speech, neglecting Armenians and everything connected with the Armenians, Armenophobia has become an important component of identity of the Azerbaijani society.

The government of Azerbaijan that “has made achievements” in practices on alienation of indigenous people, ethnic cleansing, periodically recurring mass murders over the past century, pursues a policy of falsification of history of the region, destruction or “Albanization” of the Armenian cultural heritage to achieve its national goals these days. Discussion of an unfounded assertion with the involvement of Ilham Aliyev to declare the town of Shushi the cultural capital of the Turkic world, statement of the president of the Association of architects of Azerbaijan on destruction of the Armenian churches of Artsakh, appointment of Rafik Danakari, an Udi as a priest at the Dadivank monastery and demonstration of theatrical “ritual” ceremonies, provocative statements in the media about 300 “Albanian” churches in Artsakh are irrefutable evidences of implementation of this policy. The policy of destruction, alienation of the Armenian cultural heritage is presented to the international community as a step to reinstatement of the religious right of the Albanian nation, using for this purpose representatives of the Udi people, who live in Azerbaijan in the status of hostage. Currently, efforts are being made to implement the newly established project of the “Udi” Church. It became an important tool for the anti-Armenian national goal and falsification of history. The government of Azerbaijan never misses an opportunity to announce that the “Udi” Church is a successor of the “Albanian” Church and has the right to dispose the churches located within the territory of Artsakh, historical Utik and even modern-day Turkey, which are represented by Azerbaijani scholars-falsificators as Albanian churches.

The meanness of this policy that does not maintain any criticism in the scientific sense and is minimally relevant to morality in the political sense, becomes less ambiguous when we look back at the history of the Albanian Church and historical path of the Udi people.

Historical evidence suggests that throughout history the Albanian Church was closely related to the Armenian Church. After the period of apostles’ teaching it was reestablished by Gregory, the grandson of Gregory the Illuminator in 330-332, and in the course of subsequent history was a part of the hierarchical system of the Armenian Church “from the spiritual point of view”.

The heads of the Albanian Church were ordained by Catholicoi of the Armenian Church or sometimes upon their consent.

During Medieval Period the Church of Caucasian Albania was completely Armenized, when in the 15th century the See of Catholicos was relocated to Gandzasar, the phrase “Catholicos of Albania” remained an honorary title, inherited from the past.

In order to hide cases of destruction of objects of the Armenian cultural heritage and vandalism within the territories that came under control of Azerbaijan, statements are circulated by the head of the Azerbaijani state that Armenians allegedly destroyed 64 mosques of the 67 in the territory of Artsakh. This statement is an obvious lie and has political connotations. It is sufficient to note that according to the list of historical and cultural monuments protected by the state, which was approved by the government of Azerbaijan in 1988, twenty-seven mosques were recorded within the territory of Nagorno-Karabakh Autonomous Region and neighboring areas. In this list it is mentioned that there are 282 monuments in Nagorno-Karabakh. Currently, 3900 monuments are recorded and registered in Nagorno-Karabakh, including 241 monasteries and churches. Thanks to the field investigations, the list of monuments of Karvachar and Kashatagh was thoroughly updated. Around 750 monuments have been attested and recorded, including 53 monasteries and churches. This data suggests that falsification of the facts was an essential part of the state policy of Azerbaijan over the decades.

After large-scale military aggression against Artsakh, the considerable part of these monuments came under control of Azerbaijan, and sooner or later they would suffer the same fate as the Armenian cultural heritage in the territory of Nakhichevan: the monuments would be either destroyed or, in a best-case scenario, renamed and “Albanized”.

The National Academy of Sciences of Armenia believes that protection and guarantee of integrity of the Armenian cultural heritage within the territories that came under control of Azerbaijan is a key condition for sustainable peace in the region, overcoming the humanitarian crisis and requires immediate action.

The National Academy of Sciences particularly appreciates performance of the obligation of the Russian peacekeeping forces to protect the Dadivank monastery and considers that peacekeeping activities should be expanded in order to exclude cases of vandalism and destruction of the historical-cultural monuments.

The National Academy of Sciences appreciates the approval of regulations in the Resolution “The Common Foreign and Security Policy” (CFSP) adopted by the European Parliament on January 20th of the current year, about ensuring the safety of the Armenian population in Nagorno-Karabakh, protection of the Armenian cultural heritage, safe return of displaced persons and refugees to their homes and immediate exchange of prisoners of war and bodies of the dead.

Attaching particular importance to the Resolution 2347 adopted by the United Nations Security Council at its meeting on 24 March 2017 emphasizing that “the unlawful destruction of cultural heritage, and the looting and smuggling of cultural property in the event of armed conflicts, notably by terrorist groups, and the attempt to deny historical roots and cultural diversity in this context can fuel and exacerbate conflict and hamper post-conflict national reconciliation, thereby undermining the security, stability, governance, social, economic and cultural development of affected States”, the National Academy of Sciences of Armenia appeals to the heads of Co-Chair countries of the Minsk Group to support UNESCO for the implementation of monitoring in order to assess the state of the cultural heritage, situated in the territory of military actions. At the same time, we call on international organizations, dealing with protection of the cultural property, namely the International Council of Museums (ICOM), the International Council on Monuments and Sites (ICOMOS), to assist international alliance in the issues of protection of heritage in the conflict zones and encourage UNESCO to realize this initiative”.