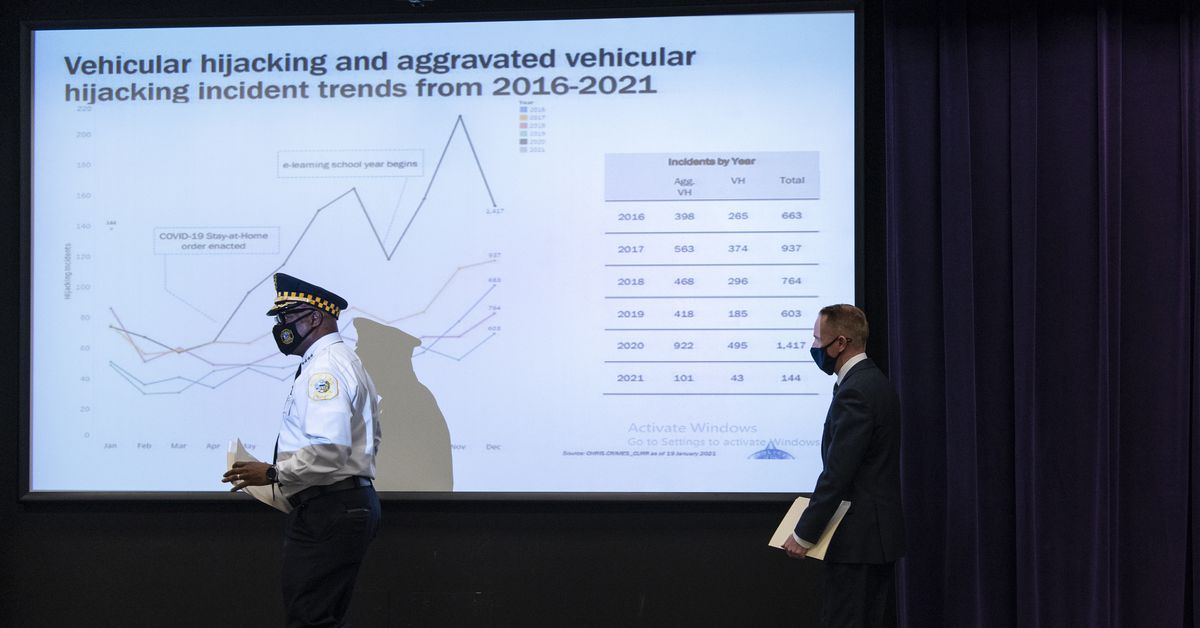 Since the start of the COVID-19 pandemic, city and state leaders have implored Chicagoans to trust the science. Data on COVID infections and deaths have been shared across agencies and institutions, and local philanthropic organizations have stepped up to help.

At a moment when carjackings in Chicago have spiked, we are troubled by the misuse of data and evidence to inform the public and City Council deliberations about this important matter. The Chicago Police Department has described carjackings as joy rides taken by predominantly Black youth. But the data CPD shared with the public and City Council, which convened to discuss this last Friday, provide little evidence to support this argument.

SEND LETTERS TO: [email protected]. Please include your neighborhood or hometown and a phone number for verification purposes. Letters should be 350 words or less.

The year 2020 saw 1,416 carjackings with 188 arrests, which means that CPD has characteristics on just 13% of offenders. In social science, we call this sampling bias, or when members of a population are more likely to be selected in a sample than others.

There are many reasons why youth would be over-represented among carjacking arrestees. They’re less experienced with committing this crime and less experienced driving different models of cars. More importantly, CPD has yet to disclose the percentage of cars that have been recovered after a carjacking. This is important because carjackings can be part of the informal economy as cars are sold for parts or, according to the FBI, transported out of state for resale.

Without data on the make, model and year of carjacked cars, we are left without the knowledge to properly tackle this problem. CPD and media coverage also create the appearance that carjacking is happening everywhere.

With data from the Chicago data portal, we produced a map of the carjacking rate by census tract in Chicago. Carjackings have been most concentrated in pockets of Chicago’s South and West sides, home to some of Chicago’s less wealthy and hardest hit by COVID-19 neighborhoods.

As 22nd Ward Ald. Mike Rodriguez stated in the City Council Public Safety Committee hearing last Friday, the spike in carjackings correlated exactly with the start of the COVID-19 pandemic.

Families are struggling economically during this unprecedented economic crisis. We urge our city, county, and state leaders to lean on data and evidence with respect to carjacking before heeding the calls for more punishment and punitive measures to the carjacking spike.

For many Chicago area families, news of the successful efforts to bring Chicago Fire Lt. Dwain Williams’ killers to justice served to remind them — and to remind all of us — that justice is not served in more than 80% of murders in the city.

Why does a murder need to gain public media attention to warrant justice in Chicago? Everyone from law enforcement to elected officials seems resigned to the daily gun violence plaguing Chicago communities. Accepting the gun deaths of mostly Black and Brown folks as an inevitability not only makes us all less safe, sending the message that one can kill with no fear of consequences.

This lack of resolution to solve murder cases effectively dehumanizes the very real lives of people who were loved deeply. We scroll through statistics and headlines, but we are losing sons and daughters, partners and friends. There is no vaccine for gun violence. Curing this epidemic will require a serious commitment to the unsolved murders.