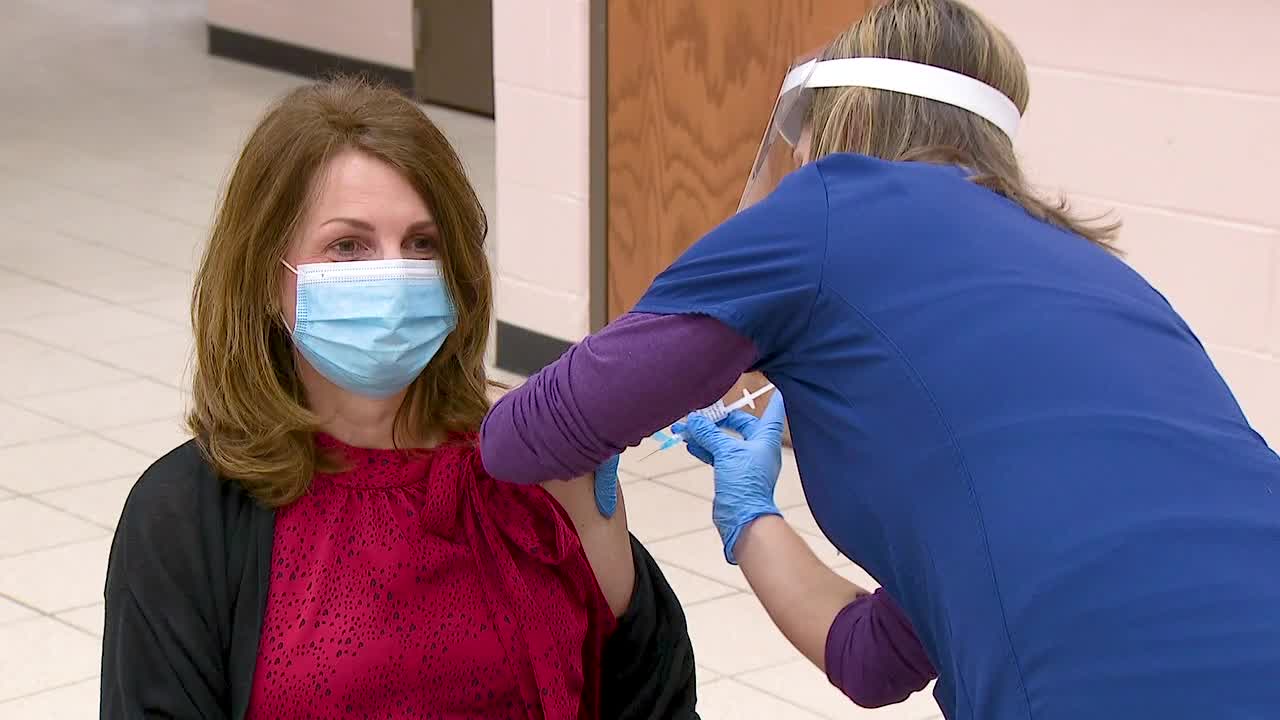 The first of the district’s nearly 400 employees began lining up at 8 a.m. at the Woodridge Middle School. Superintendent Walter Davis was first in line to get the vaccine.

“Piece of cake,” Davis said. “I sat down, and they rolled up my sleeve and away we went. No pain, nothing.”

Grades K-5 in the district have been in person throughout the school year because their elementary school building is big enough to safely space everyone out.

Davis said 80 percent of the district’s employees are volunteering to get the vaccine.

“I think this is a way out of this pandemic. You know, we have to get as many people vaccinated as we can in society in order to bring a sense of normalcy back to our daily lives,” he said.

The vaccines were being administered by staff from Akron Children’s Hospital. Pharmacists and nurses were preparing the syringes behind the scenes, then taking them to the large all-purpose room where they were quickly getting into arms.

Michele Wilmoth, director of school services for the hospital, was among those making sure everything went smoothly Wednesday morning describing the first vaccinations for educators in Summit County as, “A day in history.”

“We are so excited and thrilled to be here just really putting a dent in what needs to be done by providing these vaccines in these schools in so many places,” Wilmoth said.

“We were really pleased we also know that some of the school community members might be going out to their local pharmacy as a part of their 1B allocation. So they might be getting it elsewhere. Eighty percent was great. We are really pleased with it.”

Also among those getting vaccinated early Wednesday was Woodridge High School principal Joel Morgan who said he never had a second thought about his decision to get the vaccine.

“Much better than I thought. Easier than a flu shot,” Morgan said.

“Every decision, every plan, whether something as momentous as graduation prom to school assemblies, have all been affected by this. And it’s just been, quite frankly, it’s been exhausting,” said Morgan, welcoming any opportunity to get back to something that seems more like normal.

DeWine: Some nursing home residents to be revaccinated after COVID-19 vaccine lot compromised

Following the vaccinations in Woodridge Local Schools, Akron Children’s Hospital was vaccinating educators in Tallmadge on Wednesday afternoon and Thursday.

Employees of Akron Public Schools are scheduled to get their vaccinations over the weekend.

Katrina Daniel, a fourth grade teacher at Woodridge Elementary School, also has two children of her own in the district and was among those getting their vaccines on Wednesday

“I’m just anxious to get things back to normal. I opted to have my kids back in school. I just think it’s the best thing and they have been in person since the beginning of the year,” Daniel said. “We went online for a little bit. It was just really hard. I really want to be back in school.”

Morgan said he hopes the example set in the Woodridge Local School District will inspire educators in other districts to get their vaccines.

“I hope so. I mean it certainly, again, it’s just a step towards normalcy and a step toward making sure everyone is safe and nobody gets COVID-19, and  just hoping as many people as possible can get this vaccination,” Morgan said.